Russians invade the Philharmonia, led by Matsuev and Kochanovsky 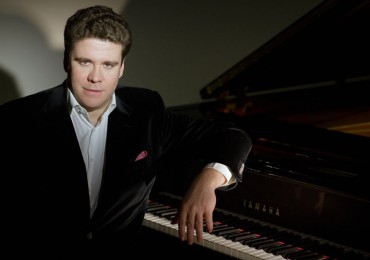 Prokofiev’s Piano Concerto no. 2 in G minor has one of the hardest solo parts in the repertoire. But it is not at all hard to listen to when played by a virtuoso of the stature of Denis Matsuev, now almost a veteran of the Russian school of pianists. In the expansive solo of the first movement, which comes so surprisingly early that it seems more centrepiece than cadenza, Matsuev was masterly. The power that accumulated as he leapt around three staves with astonishing skill, burst into a climactic passage marked fff and colossale, which Prokofiev said was one of the hardest parts of the concerto. Colossal indeed, but always musical as well. The work’s opening Andantino section was given with a quiet poise that drew the listener in, while the decrescendo and pianissimo passages near the end of the movement were nicely judged by all concerned.

The Scherzo was a true Vivace, the keyboard perpetual motion swift and light in execution, the perfect foil to the portentousness of the preceding movement. The ensuing Intermezzo was just as implacable, an Allegro moderato whose opening pesante tread led a procession of motifs each expertly characterised by piano and orchestra.

The Allegro tempestoso finale set off at a furious pace, the crazy leaps and wild figurations in the piano part provoking mighty eructations from the heavy brass. The very Russian second theme built to a fine climax, its Mussorgskian meanderings leading to the second huge cadenza of the score, despatched with same pianistic aplomb as the first. Matsuev’s playing has iron and steel and this work really suits him. The orchestral part, as the composer acknowledged, is less interesting than that for the piano, but was supportively conducted and played throughout.

With the piano now removed – and taken off to piano rehab or wherever Steinways go to recover from Prokofiev’s Second – the band could expand into the small army needed for Shostakovich’s long, and often very loud, Seventh Symphony. “The Leningrad” could as well be called “The Terror” since it commemorates victims of the 1930s as well as the 1940s. The occasion brought young Russian conductor Stanislav Kochanovsky to London for the first time. He has been making waves around Europe and beyond, and we now heard just why.

Just when we thought the baton was becoming an obsolete device, and stick technique could be replaced by skilled score-reading and shouting (in rehearsals anyway) here was a new, or rather old, sight. A proper baton (not a kebab skewer or toothpick), held delicately between thumb and index finger so that expressive movements as well as a clear beat become possible. And a continuous beat at that. Has this man been reading Adrian Boult’s old textbook? But however it is communicated, it is the musical result that matters, and that was very persuasive.

The Seventh, unusually for this composer, has little really fast music, the first movement being marked Allegretto. But this was about as swift as that could be taken to mean, or a bit swifter. Shostakovich once lamented that he had not written a proper symphonic allegro, but this began almost like one.

Then there was the subtlest easing back for the second theme, followed by pastoral peace from whistling piccolo and solo violin, before the softest of snare drum rattlings began.

This vast crescendo has a long way to go, through twelve repetitions of the theme, and Kochanovsky took care not to get too loud too fast. The terracing of the dynamics is provided in part by the swelling instrumentation, but the conductor still has to ensure that it sounds relentless and inexorable.

As a second snare drum added to the military racket, the volume became intimidating but never crude. At the peak of this brutal episode there was just enough rubato to ensure the climax arrived with terrific impact. Cue a solo from Emily Hultmark to let the tension evaporate after such a riotous and glorious din, and a long quiet retreat from snare drum and muted trumpet. The Moderato too featured several notable wind solos, from contrabassoonist Luke Whitehead and, especially poignant, the oboe of Tom Blomfield. Kochanovsky often had his finger to his lips, such that some notes at phrase ends were on the threshold of audibility, which added tension (for player as well as audience).

The great Adagio is one of the few moments in Shostakovich where the conductor, as here, can suggest a religious sensibility, the opening wind and horn chorale a spellbindingly spiritual moment, before the superb strings covered themselves in glory. The finale’s blazing coda was Brucknerian in nobility, and this impressive conductor was duly acclaimed. If this was an audition for the Principal Conductorship which Salonen will soon vacate, then Stanislav Kochanovsky might have become a contender. Whether in that position or not, he must be summoned back.