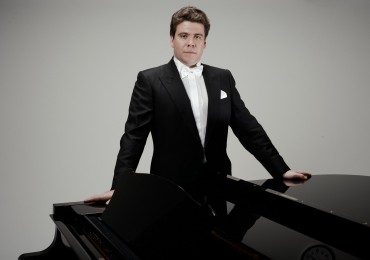 Prokofiev wrote his Piano Concertos with a keen awareness of his own prowess as a pianist, but the Second, in its revised version, is in a virtuoso league of its own, even for him. It is stupendously difficult, with a cadenza – really, more of a fantasia – that effectively takes over the first movement.

Step forward Denis Matsuev, who is no stranger to the weight-lifting end of the repertoire, and he took its extremes in his stride.

Moreover, for a work that throws everything at the soloist, Matsuev gave it its own logic and musicality.

He has the swagger and style of engagement for all the virtuosic razzle-dazzle, but he also has a wildly exciting, sinuous suppleness that makes the Concerto’s jazzier elements really swing.

Moments of repose – the melancholic slide into the first movement, a shaft of Romeo-and-Juliet-style sensuality in the Finale – remind you that Matsuev, for all the pressure he put on his Steinway, never made an ugly sound and he never shrouded the music’s might in clouds of pedal.

Kochanovsky met Matsuev more than half-way in giving the orchestra’s role more bite, and the Philharmonia easily matched Matsuev in terms of visceral attack. The cluster of brilliant glissandos that brought the Concerto to a close and Matsuev the showman to his feet clinched the overwhelming aura of thrill-seeking, risk-taking spontaneity that also brought the audience to its feet. Matsuev calmed things down with a short encore, Etude in A-minor from Sibelius’s Opus 76 collection.