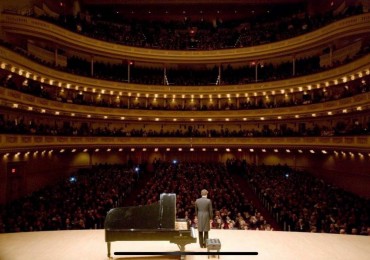 The crowd at Carnegie Hall gave pianist Denis Matsuev an excited, vocal ovation when he stepped onto the stage Wednesday night—it had the energy of people expecting something spectacular to happen.

And something did. Matsuev delivered what many in the crowd were looking for, some incendiary playing. And while that was expected, that was the least of it. He played beautifully, with expressive thinking, nuance, and depth. Matsuev provided characteristic power, as in Rachmaninoff’s Piano Sonata No. 2, But what was most deeply impressive about this terrific recital was the quiet details of his playing in music by Beethoven and Schumann.

Opening with Beethoven’s final two sonatas, and then playing Schumann’s Kinderszenen after intermission, the pianist played with an excellent balance of clarity and insight. Prominently known for extroverted speed and power of articulation in the music of Rachmaninoff, Tchaikovsky, and Shostakovich, Wednesday night Matsuev showed that he could also play with the qualities of curiosity, purposeful feeling, and grasp of form that make for the most rewarding musical experiences.

That was the story of the concert, beginning with Piano Sonata Nos. 31 and 32, played in order. The opening bars of the Op. 110 Sonata in A-flat Major set the tone for what was to come. The music begins in gentleness, and Matusev’s playing was supple. But even as the sonata gains energy, forward momentum, and some agitation, he held back. This was a real interpretation, personal and even radical in a subtle way, keeping as much repose as possible in the right hand. At times, the volume and energy in his left hand overwhelmed the right, and it seemed like old habit and new ideas were in a fight, but this was not any kind of problem. Instead it was hearing an artist questioning the music and their own path, more attractive and meaningful than hearing someone who thinks they have all the answers.

There was a spontaneous thoughtfulness in Matsuev’s playing. His transition from the introverted intensity of the Adagio opening in the final movement to the major-key fugue sounded like someone truly working through a problem, and he brought back the complexity of that feeling when the slow subject returns later in the finale.

One admired how he took the dramatic fanfare that opens Sonata No. 32, still holding back, staying within Beethoven and eschewing bravura styling for thoughtfulness and a clear appreciation for the beauty of the music. He put more concentration into pressing the dissonances in the music than in the cascades of notes that come in the opening movement.

He played the second movement with poise and care. This is extraordinary music, a stately, personal reverie that hints at death and acceptance, a looking back on life and looking ahead at fate. Matsuev didn’t reach the most transcendent quality, but his playing was still a psychological journey, exploring how playing a composition can bring out memories and feelings in the artist and listener. While he did not have the perfect spring in Beethoven’s dotted rhythms, the passages of high arpeggios and trills were luminous.

Kinderszenen was marvelous. Matsuev’s playing was charming and elegant, with the right balance of energy and care, like tossing a raw egg from hand to hand. Stretches like the passage from “Am Kamin” to “Ritter vom Steckemferd” to “Fast zu ernst” followed a line that changed moods without being mercurial. One heard the music as organized by a child’s imagination, flexible and varied but balanced and in no way exaggerated by an adult’s experience.

The Rachmaninoff sonata was thrilling in an artistic not just technical way—even with mobile phones of a dozen of his fans continually going off. Matsuev sounded completely in his element, displaying his speed and power, the articulation of each note and line while also working with flexible tempo and phrasing. More, there was an expressive purpose in every moment, a constant sense of intention. This gave the performance tremendous turmoil, but it was never turgid or just a mass of notes.

This mattered because Matsuev’s playing was full of extremes of power, not just volume but forceful articulation, the feeling of meaning being pushed through the notes. There is a huge amount of agitation in this music, but always a singing line just under the surface, and the pianist playing with both extreme aggression and absolute clarity of that line.

Matsuev’s explosive playing produced an equal and opposite explosion in the audience, which led to four encores that were tightly integrated into the whole concert.

First, he played Alan Richardson’s arrangement of Rachmaninoff’s famous Vocalise. This sounded brittle in a fascinating way, the pianist shaking off the nervous energy from before. After this, he went off stage, before the applause drew him back again.

Then he played Chopin’s C-sharp minor Waltz, Op. 64, no. 2—fully relaxed and rich with personal flavor, like Matsuev gained a second wind and was starting again from scratch.

Finally, he played his own arrangements from Grieg’s Peer Gynt, a deep and improvisatory “Solveig’s Song” that sounded less like Grieg and more like an homage to the great Chick Corea—who died on the same February day last year—then “In the Hall of the Mountain King,” a valedictory, and final, burst of energy that sent everyone out of the hall, bopping a little higher than when they had come in.