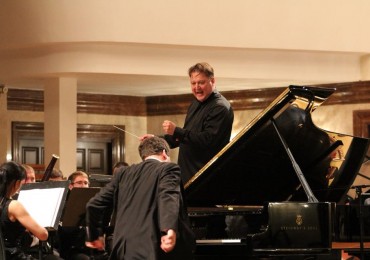 Under their Music Director Alexander Sladkovsky, the Tatarstan NSO host seven annual festivals in Kazan, attracting some of Russia’s finest musicians; the opening concert attracted Yuri Bashmet and Olli Mustonen. This year’s festival marking Rachmaninov is taking place during the World Cup in Russia of which Kazan is one of the host cities. This naturally adds to the glamour of the event.

Denis Matsuev has established a fine relationship with Sladkovsky and his orchestra, appearing with them several times on tour to Europe and here he was the soloist in Rachmaninov’s Rhapsody on a theme by Paganini. His compatriots Andrei Ivanov and Alexander Zinger played the Gershwin Rhapsody in Blue, with Sladkovsky undertaking Rachmaninov’s Second Symphony opening this celebration of Rachmaninov’s music. The concert took place in the Tatarstan National Symphony Orchestra’s home the Saideshev Concert Hall which boasts a remarkable acoustic with a great organ above the stage. The hall boasts a beautiful art deco style throughout the foyers and building situated nearby to the impressive Opera and Ballet Theatre named after the Tatar poet Muza Jalil.

The city of Kazan of course has a great history of music making, it is also the birthplace of one the greatest singers who ever lived – Feodor Chaliapin to whom an impressive statue adorns the central Bauman street. Unfortunately, he lived in great poverty here and learned his craft elsewhere, but the impressive Opera and Ballet Theatre has produced many fine singers over the last hundred years. Among the top Tatar singers is Aida Garifullina who sang at the opening World Cup gala concert on Red Square.

The packed hall was decorated with a great portrait of Rachmaninov hanging over the organ and the huge orchestra who began with Rachmaninov’s Second Symphony, unusually with the climax of the evening left for the concertante pieces. Sladkovsky opened the evening directing Rachmaninov’s Second Symphony opening up with the cavernous rumble from the basses and low strings, followed by outstandingly fresh playing from the antiphonally violins on left and right (there were twelve first violins and eleven second violins), and the effect created was if a great beast is awakening, or perhaps the sun emerging from dark clouds now pouring rays of warmth on the Russian steppes. The desolate lonely theme from the woodwind by clarinettist Artur Mukhametshin and the oboe of Andrey Shubin show they are among the stars in this immensely talented orchestra. The sadness and wretchedness of the second theme in the great Largo is as if telling of a great sorrow on the earth and broken by the sudden development of the dynamics led to a climax which was overwhelming in its power. It was pleasant to see how much the conductor was living the music, the emotion clearly etched on his face. Sladkovsky ensured an exciting attack from the strings in the switch to Allegro moderato and which was stunningly handled; the quality of the strings here is quite remarkable! Noticeable too was the eloquence of the wind section, and the middle section of the allegro section was adorned by a beautiful solo from the violin of Alina Akonina, the first of several notable contributions by her during the evening. In the second movement, Allegro molto, there was a brilliant attack on the violins, and a marvellous depiction of the Dies Irae from the glorious brass section, and what a stunning solo from the flute of Venera Porfirieva, as if singing this romantically voiced theme. Sladkovsky’s placement of the divided violins is excellently apt for this music and allowed the distinct shades of colour to be fully expressed, and a remarkable handling of orchestral dynamics. In the Adagio, the clarity of the woodwind articulation of the woefully sad theme was followed by the most romantic string playing over a suppliant idea ending with a great crescendo, then a beautifully held pause before the violin solo, and the flute again, with some beautifully evocative strings and it seemed a tear was seen on the conductor’s face could be seen. In the finale, the sudden attack on strings was brilliant in switching the mood to a thrilling expectation, and before the conclusion, a sentiment of joy presented by the violas, violins and from every section of the orchestra playing to the same high quality of tremendously exciting, with, it seemed to me, a discernment of elements of modernism wrapped up in Rachmaninov’s writing. Sladkovsky is a tremendously exciting conductor to watch, and this performance reprised a work performed in his first concert with the orchestra eight years ago. It is clear this music is important to him. Here he showed that he is among the finest interpreters of Rachmaninov in Russia today. Sladkovsky played the symphony, only making a short cut in the finale, as is the custom here in Russia.

The phenomenon of playing two or three concertos in an evening seems to be uniquely Russian idea, perhaps inherited from the era of Anton Rubinstein, yet posing enormous pressure on the soloist but here it was easy meat for the Siberian pianist. Matsuev was reunited with Sladkovsky and his orchestra for Rachmaninov’s Rhapsody on a theme by Paganini which was highly accented in a dazzling clarity of expression more apparent than the performance I witnessed three months ago in Moscow. Throughout his still young career, Matsuev is continuing to show he is incredibly articulate and clear as a bell in his delivery. Here the increasingly colourful variations were delivered with extraordinary bravura and panache, closing in complete unity of purpose between orchestra and soloist. The Gershwin Rhapsody in Blue was a first hearing in Kazan of this arrangement by Matsuev with variations including Andrey Ivanov on double-bass and Alexander Zinger on drums. Mixing classical music with jazz may seem complex but here it all seemed quite novel, Matsuev seems to be a consummate jazz pianist as if he had always played in jazz bars, the orchestra were magnificent backing up the jazz trio with marvellously clean playing, and a fine solo from Alina Akonina on violin. The whole occasion led to a standing ovation and a tremendous climax to this extraordinary concert.