A musical anniversary marked in thrilling fashion by Matsuev, Honeck and CSO 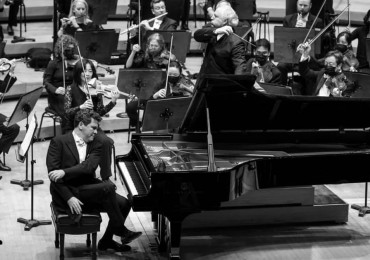 One hundred years ago, a tall, pale scholarly-looking young man walked out on the stage of Orchestra Hall to debut his new concerto with the CSO and music director Frederick Stock. The composer was Serge Prokofiev, the work was his Piano Concerto No. 3, and the rest is music history.
This week’s program is marking the centennial of that historic occasion (December 16 and 17, 1921). And one could hardly have picked a more apt soloist to give this anniversary performance than Denis Matsuev.
Denis Matsuev performed Prokofiev’s Piano Concerto No. 3 with Manfred Honeck and the CSO Thursday night. Photo: Todd Rosenberg
The Russian pianist has both the muscle and the stainless-steel technique to tackle the myriad difficulties of this warhorse, as he so richly demonstrated. The speed-race to the blazing coda of the opening movement provoked quiet exclamations from audience members who were astounded at the soloist’s power and velocity.
Yet Matsuev also brought a compensating restraint to the variations of the central Andantino. There was a fantasia-like Chopin quality to his first solo and the pianist brought a surprising limpid delicacy to the lyrical sections in between the hard-charging variations.
More than in most concerto performances, Honeck and the CSO were fully equal partners with the soloist. The conductor led a boldly projected, boisterous orchestral accompaniment that would likely have swamped any other soloist in this score.
Matsuev invested the finale’s spiky main theme with emphatic punch and built the cumulative intensity of the finale relentlessly. The buildup to the percussive coda amid Matsuev’s dizzying glissandos and corruscating brilliance provided the most thrilling display of solo virtuosity at Orchestra Hall since the CSO’s reopening and of recent years. One can hardly think of a finer or more successful marking of this historic Chicago premiere.