Instead of an interview 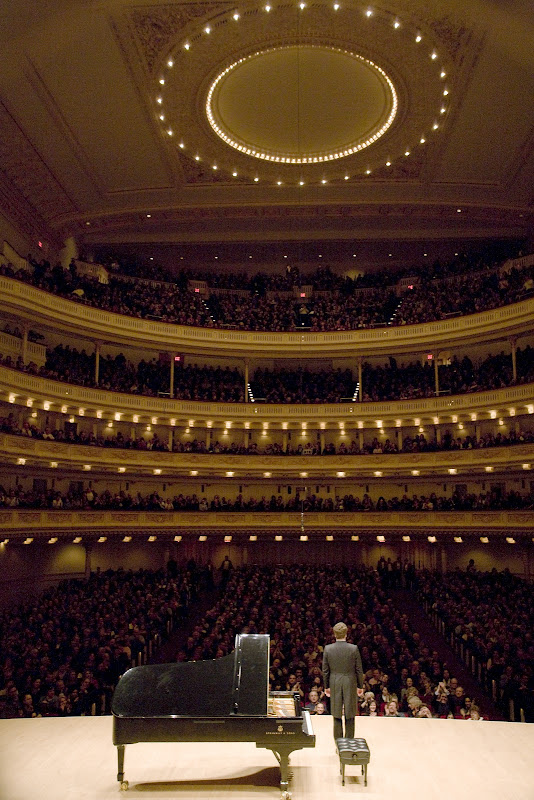 Performing in the US is always pleasant - there is a very relaxed atmosphere. And I mean relaxed in a good sense. Many people say that if an American paid for a ticket he wants to get everything for the price of it. One middle aged American lady approached maestro Temirkanov after a concert saying “Maestro, it was great! I like your show!”. The maestro replied  “ I played Tchaikovsky and Rachmaninov, it was not a show” . But they just call things differently which does not mean that they are uneducated and just want to be entertained. They have maintained their culture, and the culture of going to classical music concerts in particular. Of course the audience in every place is very different, with its own traditions and rules. A lot of Russians came to my concerts in LA and NY, which is understandable because there are more than a million of Russian-speakers in NY. It is always nice to meet the compatriots on CD signing sessions. I love this tradition, that in spite of the post-concert exhaustion, I go off-stage to sign CDs, to chat with people who just came out of the concert and bought my CD. Sometimes you can see things in their eyes that are impossible to feel during a concert.  I appreciate the American public a lot but it’s a very special feeling when I see Russian faces after the concert. And if they happen to be from Siberia – it becomes a real gift for me. You all know that Siberia and Irkutsk mean a lot to me.In every interview I keep saying that I play for every audience, regardless nationality, or financial or social standing: President, pope of Rome, doctor or engineer. I always work flat out. The audience’s opinion will always be my priority – as well as the opinion of people I trust: my family, Prof. Dorensky, my father and few more. Meeting the concert goers after the concert is a great idea that I have started implementing in Russia.I should say that the classical music recording industry and its market are extinct, they don’t exist anymore. But recordings are the only thing that stays after the artist is gone. I am convinced that we still need to record CDs and in spite of rampant pirating and free Internet downloads. Artists that used to make their living selling records through recording companies are doomed. The only possible way for classical musicians to sell CDs is at concerts. My US tour program was very interesting: Schubert, Beethoven and a rarely-played Sonata by Grieg which I carry as one of my childhood memories of Grieg’s music. On Youtube I watched a recording dated by the beginning of XX century of Grieg himself playing this Sonata. By listening just this one piece we can understand how great a pianist he was.I regret deeply that Liszt didn’t live long enough to record his playing. That would be a sensation!Of all musicians of the 20th century, the incredible Rachmaninov has a special place. I and Michail Pletnev discussed how we felt while recording Rachmaninov concertos (Pletnev recorded it 12 years ago, and I – 5 years ago).  Michail said it very well  “Each of Rachmaninov’s phrases makes you cry”. Immersion into Rachmaninov’s atmosphere is very special for any musician. The sound of his instrument is unique, and not only because of his piano… He was a genius as a musician, composer and conductor. At a late stage of his life he dreamed about conducting his own Symphonic dances but his American managers did not let him do it. The all-powerful concert-organizers did not need Rachmaninov- the conductor, but just Rachmaninov -the pianist, to sell tickets….The word “sell” does not make a lot of sense for classical music. I also don’t like the meaning of “classical music promotion”. We should educate and enlighten more than promote. And these are totally different meanings.I always read press reviews about my concerts. Some musicians say that they never read reviews but I’m sure the majority of us does, specially if they are published in Los-Angeles Times, New-York Times, BBC Music Magazine and some other English newspapers. These magazines still have a column for classical music reviews, where independent critics write only about what they hear and think. It means a lot. I live by these reviews and I am always looking for a something in them that can help me play better. Now I am learning a new piece (I will keep its name as a secret for a while) and I am not only listening to old recordings of it, but also reading reviews, and getting a lot of interesting information about it.When by one crazy spurt I got back from NY to the Moscow Philharmonia I immediately went on the air with my video-blog. We played a concert in an amazing, friendly, family-like atmosphere, almost without a rehearsal. I was happy for philharmonics, for all musicians participating in this concert. The real philharmonic knowledgeable audience gathered there this night.And now I am away recording a new CD! All details will be a secret for a while. See you soon!