March, 5, Denis Matsuev and the London Symphony Orchestra headed by Valery Gergiev will give the final concert of the triumphal Asian tour. During the tour that embraced Seoul, Beijing and Shanghai Denis Matsuev, one of the best Russian pianists, played Sergei Prokofiev, one of the most often performed Russian composers.The concert in South Korea was especially meaningful because the London Symphony Orchestra visited the city for the first time in 6 years. The press noticed that Denis “enthralled the audience with a rendition of Sergei Prokofiev's Piano Concerto No. 3”. No less meaningful was the visit of Denis Matsuev and the London Symphony Orchestra headed by Valery Gergiev in Beijing and Shanghai. The critics state that there are more and more connoisseurs of classical music in the country. Performances of famous musicians are in growing demand, new concert halls are constantly being built throughout the country.Denis’ concert geography in 2012 has been impressive: he has performed in New York and Los Angeles, in Irkutsk and Saint Petersburg, in Zurich and London, in Tokyo and Seoul and many other cities. Soon the musician will be heading to Kazakhstan and Germany and then he will devote the first half of April to Russia – Orenburg and Chelyabinsk. 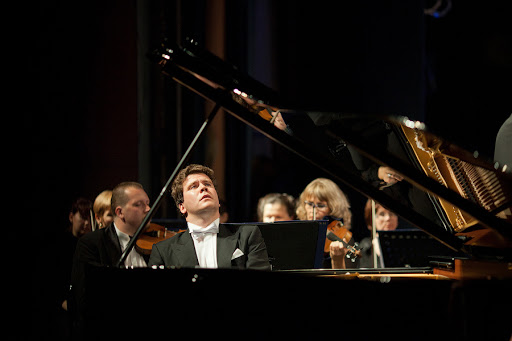