Yesterday absolutely unusual improvised concert took place. I repeat time after time that the best concert always is based on improvisation, and this concert was a proof of that. Unexpectedly I found myself in Drvengrad, cultural oasis, created by the efforts of one man - Emir Kusturica. He really managed to create his own planet of art, which attracts creative people from all over the world. I experienced emotional upheaval of what I saw here. Every detail in this village is somehow connected to work and life of Kusturica. There is a street of Fellini and a street of Diego Maradona. The wooden town almost all is the scenery for the movie "Life is a Miracle," which was filmed here. Wooden, very picturesque, in folk style huts. It is a unique ethno village, that makes a strong impression on every visitor.

Plunging into its atmosphere, I immediately realized that the festival life here is kept on the talent, the charisma and creative thinking of one person, who is an absolutely young man in heart. Everyone knows that Emir Kusturica is a brilliant director, musician, citizen and a political figure, with clear and firm believes, an ardent patriot of his country (many movies, that he’s made, were the creative reflection of very disturbing events in his country in the 90-ies of the last century).

Yesterday we also flew to Višegrad. A very nice town on the Drina river, in the mountains, where Kusturica’s already built the half of the same kind of cultural oasis, but in a larger scale. They built here the Academy of arts. This is a town where you students and professors from all over the world will come to learn and to teach. There will be concert halls, libraries and theaters. Only the personality of a Grand scale was able to create such a project, it is not a secret that Kusturica is investing in the construction and development of the city a lot of his own money.

Yesterday I posted a small video clip about the concert. And you could see that there was a wooden scene on the edge of the cliff. There was an incredible feeling from an absolutely unique atmosphere: on the one hand - no acoustics, and on the other hand - a very special sound.  And it is all despite the fact that there were no microphones, amplifiers, acoustic frameworks. I was shaken to the core. And a brilliant Director would not have been a brilliant Director, if not invented spectacular trick in the end: I played Bach, Mozart, Chopin, Liszt, Rachmaninoff and, when I played the last note, the grandiose salute soared in the sky!

And it was not yet the end of the evening. Because we had the opportunity to listen to the Serbian songs with their original hot temperament. And THAT was not the end! We went to a jazz jam session, and it is the part of the evening the impressed me most of all. Huge house in ethnic style. All jazzmen - guys of 20 year-old, not more and at the same time with the level of performance of absolutely mature musicians. But I was even more impressed by the audience, that came to the concert: practically children, young people up to 25 years, who understood everything, each note, each phrase, each square. And it was the moment I realized that Kusturica managed to create his cultural oasis, his own state, which attracted musicians and art lovers from all over the world. And for me it was a great revelation. And we are going to do some projects together in the near future for sure.

And now I bring you greetings from Colmar! 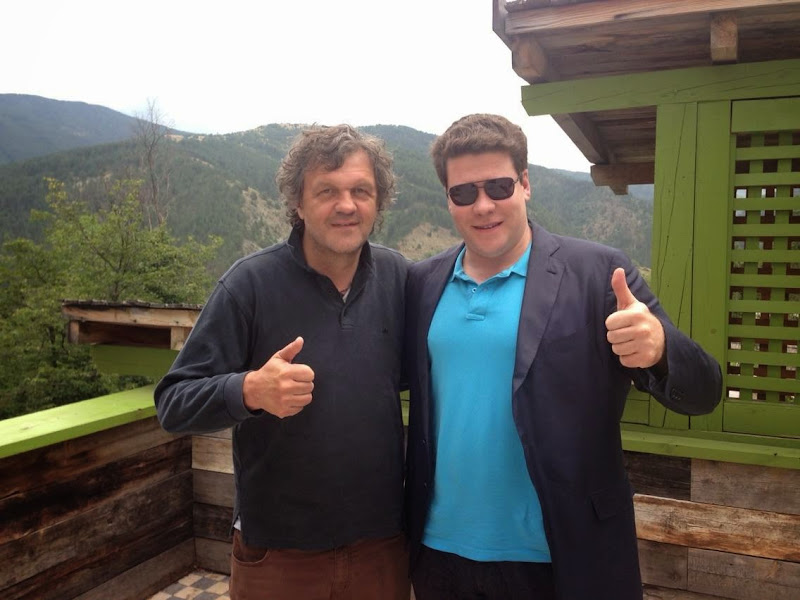